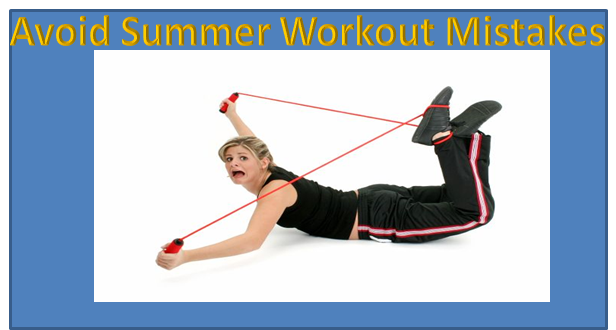 As you may have noticed, summer has arrived. We’ve talked about 5 tips to keep cool during summer workouts earlier this week. Now let’s talk about 6 common mistakes of summer exercising and ways to avoid them.

1. Coffee Before Working Out

Not often would one think that people thirst for a boiling hot cup of coffee, hot chocolate, or tea when temperatures are hitting 30C and rising. But thankfully for the coffee shops, people do indulge in them. A hot drink on a hot day can really cause a sweat without you doing more than raising the cup to your mouth. And that’s why water is the much more preferred choice of beverage before you work out.

The goal when hydrating yourself in the heat is to also keep yourself cooled down, since the workout itself is going to cause you to sweat. Any high-caffeinated drink will act as a diuretic against your body. This will cause more fluid to be lost than usual when working out.

This is easily avoidable. Have a glass (or two) of water before working out. A nice cold drink (with NO alcohol) will fuel your body and let you work out safer and for longer.

For those who enjoy morning workouts, pay attention. You will not want to delay your workouts an hour later than usual. Temperatures rise more early in the day during summer. You want to exercise in the cooler hours, not lose out and put yourself at risk of overheating later in the day.

Make sure you go to bed early and rest well. Keep working out in the mornings, even on weekends, as you have scheduled. If for any reason you need to delay your workout, push it to later in the evening, when the sun has set and the air has cooled off again.

There are no strict rules what to wear when exercising in the summer. Common sense should tell you that you don’t want to wear heavy materials. Loose fitting clothing may sound like a good idea instead but you may find this could cause some chaffing, mixed with your sweating.

Your best bet is to find some light material clothing that’s not too tight, but not very loose. You could wear spandex underneath some looser clothing material if you want, as well.

4. Eating Less After Working Out

Often times we work out to lose weight, so this may sound strange. But when you exercise in the summer heat, you need to replenish your fluids and your food supply (your energy) as well.

It’s recommended that you eat in the first 30 minutes after working out.

Because eating a large meal in the heat is often not what you may feel like doing, skip the ‘large’ part. A hard-boiled egg with some carrot sticks would be enough to replenish your energy. Or try a homemade smoothie or even a whey protein shake to not only refuel but also re-hydrate your body.

5. Not Drinking Before A Swim

Many people don’t drink water before they get into a pool. Being in the water is not as good as drinking water; Soaking in water is not a good alternative to hydrating with water. Exercise is exercise, and hydrating before a workout, whether a pool workout or not, is important.

You should also be aware that when you are in water, it is harder for your body to get rid of its heat. This means overheating in the pool is more of a threat than when exercising on land.

Listen, I love wearing my black t-shirts. But I can’t deny that a black shirt under the hot summer sun is going to make the day feel hotter than if I were to be wearing white. Working out in black or dark coloured shirts only makes it worse.

• Wear a shirt when you’re exercising outdoors. The urge to workout topless (men, we’re mainly talking to you) may be strong, but a light coloured shirt will help battle against the sun. Sunscreen may sound like a good choice, but trust me. You want to wear a shirt.

• When riding a bike, wear a helmet. It’ll keep your head cooler and add protection against accidents, even if you’re bald.

Outdoor exercising during the summer does great to mix up your routines. All these tips will keep you working out safely.
Sign Up For Your FREE Trial Today